We really like the Sole F80 Treadmill. It’s build is solid, has a great weight capacity, and will perform very well for someone who is not super tech-savvy. Read the rest of the review to see if the Sole F80 is a good fit for your home gym. 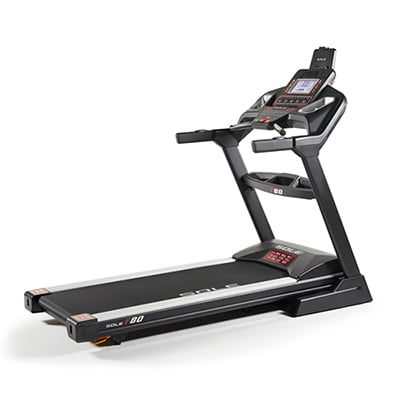 The Sole F80 Treadmill is one of the most popular models of treadmills sold on the market today. When it comes to competing with the NordicTrack/ProForm (ICON) juggernaut, Sole might just be the most competitive - and the F80 seems to be their flagship/anchor model.

With a solid build, good price tag, and decent features, the F80 Treadmill by Sole is a solid option for those looking to purchase a treadmill in the $1500 range.

Who the Sole F80 Treadmill is For:

It’s also good to note that the weight capacity of the F80 is 300 lbs, which is one of the highest for treadmills in this price range. If you are someone who needs that extra weight limit in this price range, then this is a great option. 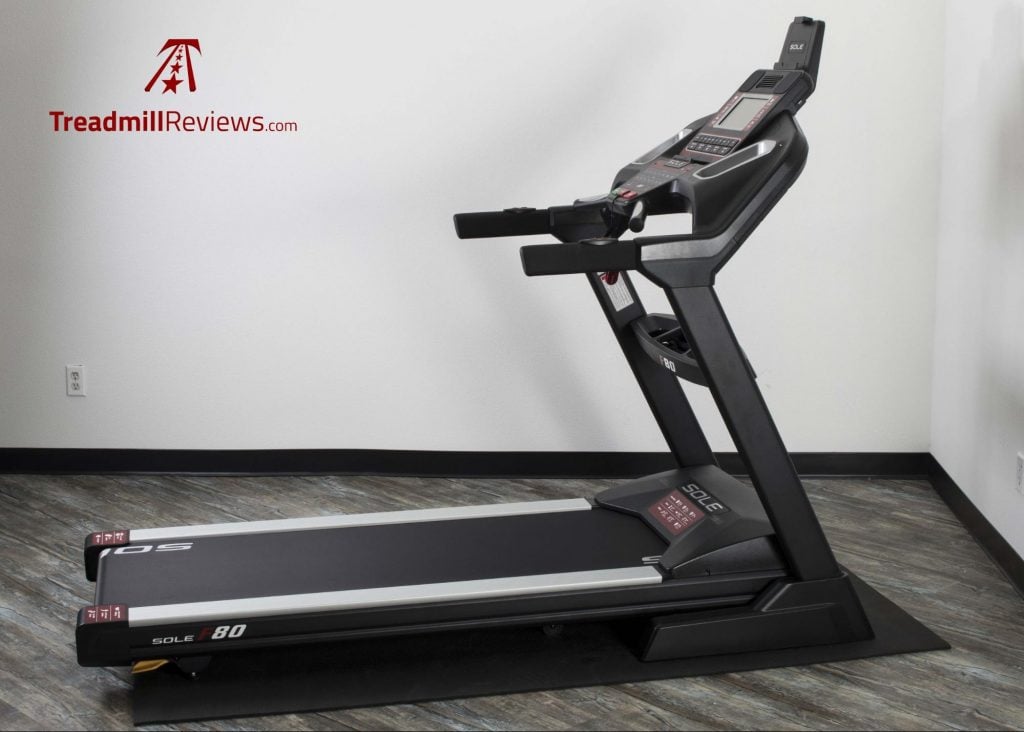 Motor Size - The motor on the Sole F80 is a 3.5 CHP (continuous horsepower), DC type motor. One of Sole’s strengths is that their motors do tend to last a while. As such, Sole has built up a following of people who like a machine that, while simple, lasts and does its job. We do like how the motor is a CHP motor vs HP, as you will get more power from that in a treadmill. At 3.5 CHP, the Sole F80 comes in just under its main competitor, the NordicTrack 1750, which boasts a 3.8 CHP motor.

Folding - The Sole F80 is a folding treadmill. It folds easily, using a hydraulic arm to carry most of the weight of the deck. Once folded, the deck locks into place. Four wheels at the base of the Sole F80 make it one of the easier treadmills to move around. The deck is released by pulling the yellow lever at the top end of the deck. Lowering it is really easy. You can let go of the deck once it’s been released and it will slowly lower itself to the ground. 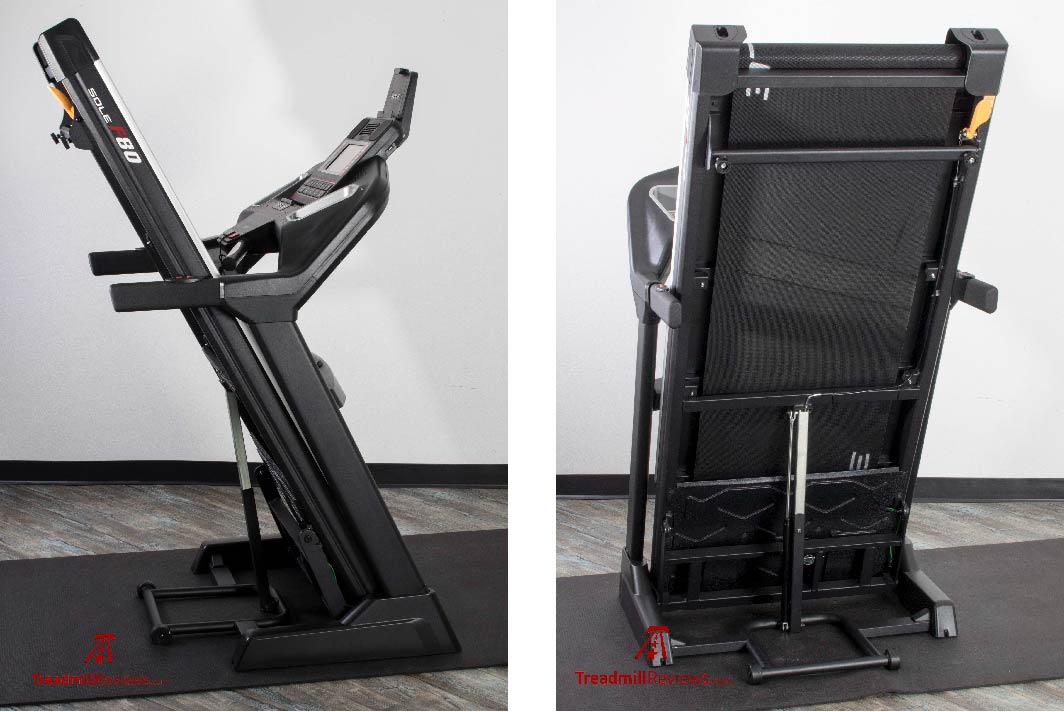 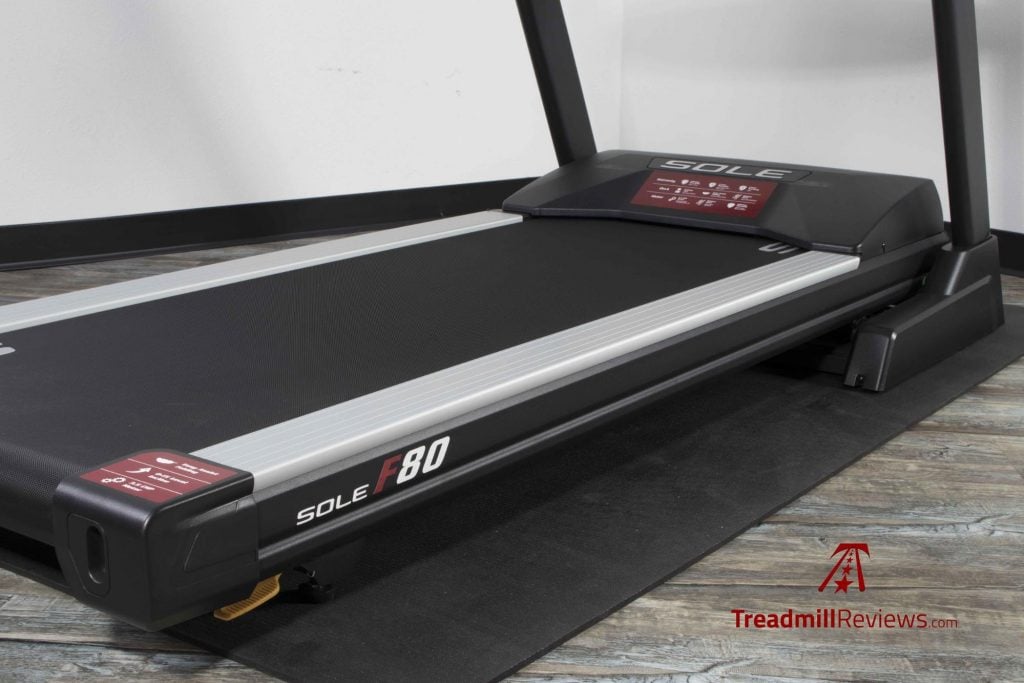 This is slightly more than the NordicTrack 1750 and the Horizon T7. 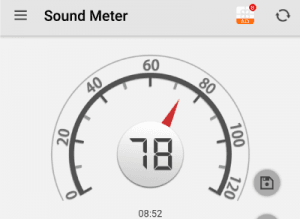 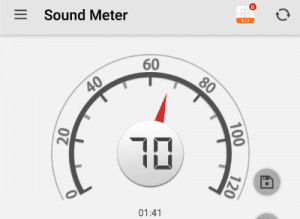 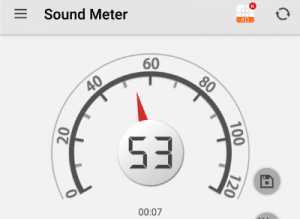 As you can see, the numbers show a pretty quiet machine that is right in line with the competition. You can for sure run on this treadmill while your child is sleeping in another room.

Max Speed - The F80 has a minimum speed of .5 mph, and a maximum of 12 mph, which is fast enough for even really fast runners. If you can average better than a 5-minute mile in training mode...well you’re awesome! 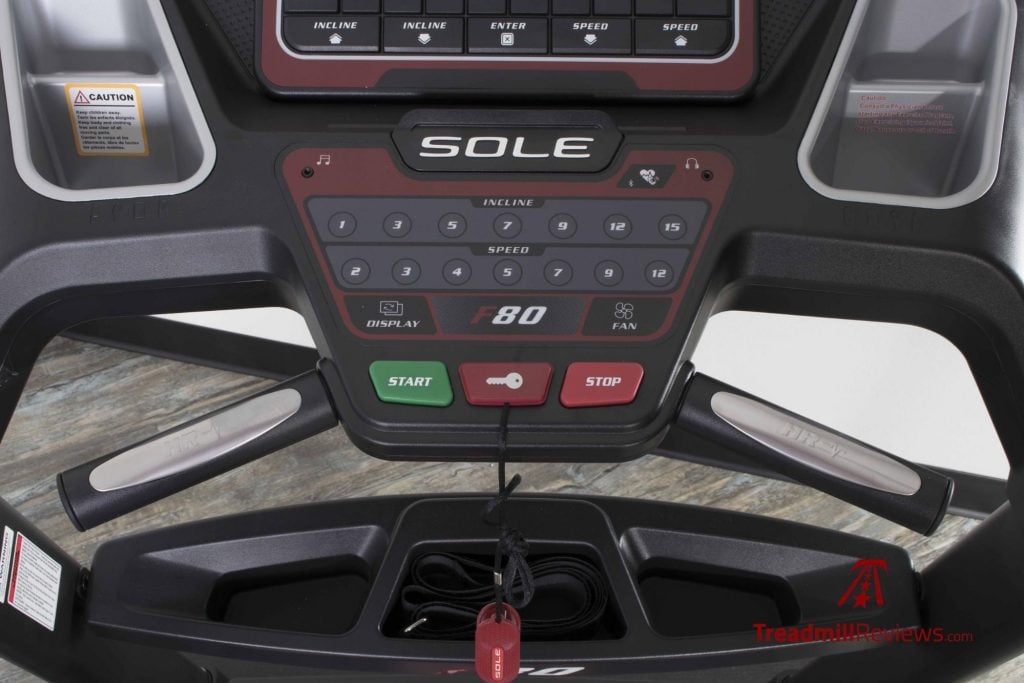 Incline/Decline - With an incline of 15% you will be able to really get a great workout in while running on the F80. No, this doesn’t compare to the 35-45% inclines you find on incline trainers, but this is very comparable to our other topic picks in this price range.

One thing we don’t like about the F80 is that you don’t have the ability to run at a decline - the track won’t decline below 0%. While we don’t know many people who love running downhill, that doesn’t mean you don’t want to be able to train for when you have to run downhill. This is something we hope Sole will improve on in the future. 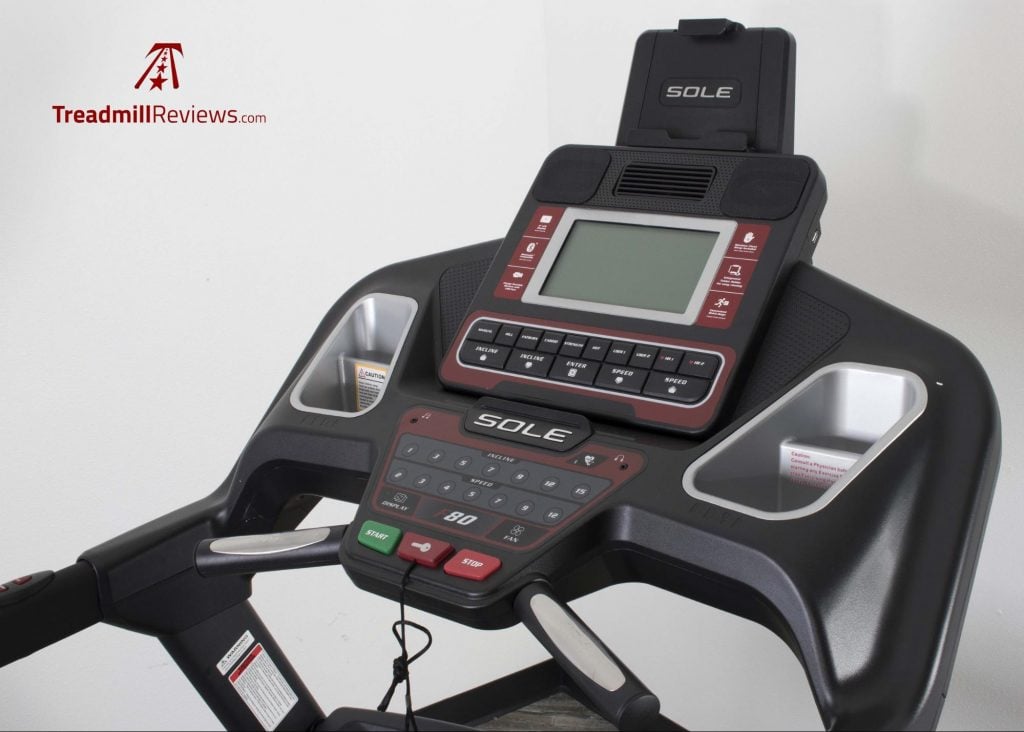 While the Sole F80 is great, solid machine (see build quality below), where we do feel it falls short is in terms of features. Sole’s treadmills definitely don’t have the same amount of tech and other features found in some competitors’ models (NordicTrack and ProForm specifically). However, we do feel that Sole fits a specific niche in the market - those people looking for a straightforward, solid treadmill where you don’t have to worry about tech and touch-screens.

In other words, if you are someone who likes physical buttons, simple yet straightforward workouts, and don’t like dealing with technology (which, we do feel it’s important to acknowledge that sometimes tech ends up causing problems), then the F80 could be a great treadmill for you and your family. We would also recommend it for older generations who struggle with swiping through multiple touch screens or using devices like iPads and tablets.

The Sole F80 treadmill comes with a total of 10 different running apps. There are 6 different programs (manual, hill, cardio, fat burn, strength, interval), 2 different target heart rate programs, and then you also have the ability to customize 2 different user programs.

Overall, they are good programs. Solid, nothing flashy, but they work.

9” White Back-lit LCD Screen - As you can see from the image above, the Sole F80 comes with a basic, non-color, LCD screen. The size, 9”, is nice - but other than that, the screen is very basic. 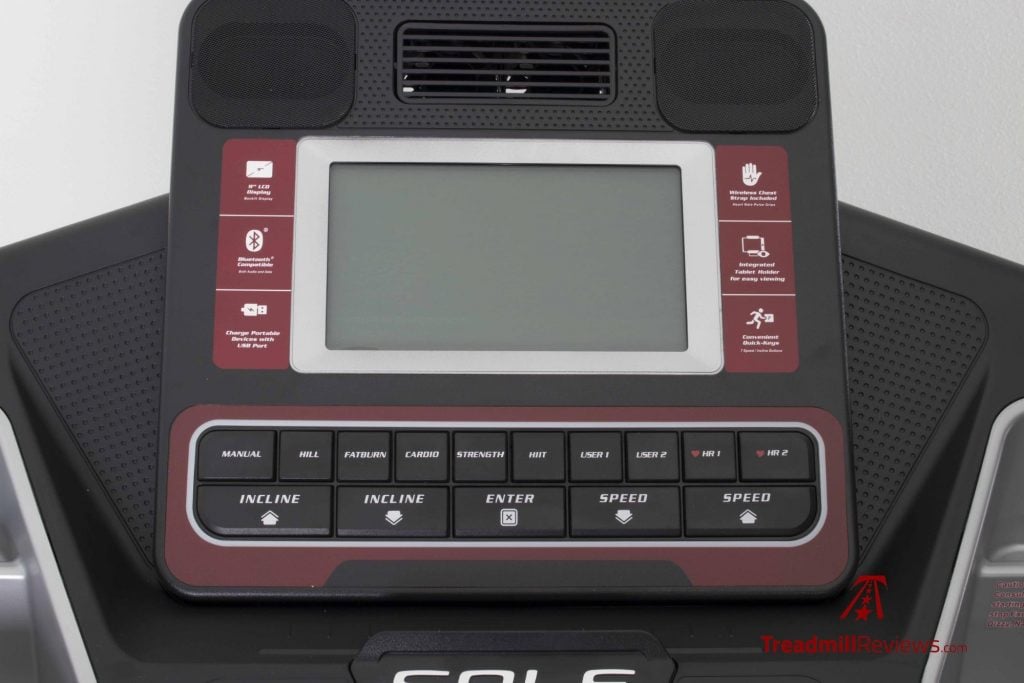 There are 2 small speakers that come with the F80. The speakers don’t really put out much volume, so don’t plan on really rocking out while you are running with these. We would say these put out about ½ - ⅔ of the sound volume produced by the 1750.

It is nice that Sole includes an adapter that you can use to connect your phone so you don’t have to buy that.

Workout Fans - 2 small workout fans sit at the top of the console. We do wish that Sole would have done more here, as the fan output is very mild and disappointing. There is also only one speed.

Bluetooth Heart Rate Monitor - We like how a wireless Bluetooth monitor comes with the F80. While the heart rate grips worked well, we are still big fans of the Bluetooth monitors because grabbing and holding onto the grips while running is awkward on all machines. However, this issue is a little worse on the F80 given how low the grips are. If you are above 6’0” then this could get annoying very quickly.

Cushioning - Sole has what they call their “Cushion flex whisper deck”. Unfortunately, the run feels much more firm and stiff vs the 1750, and there isn’t a way to adjust the firmness. If you are someone who likes a more firm running surface, however, then you will like this model. 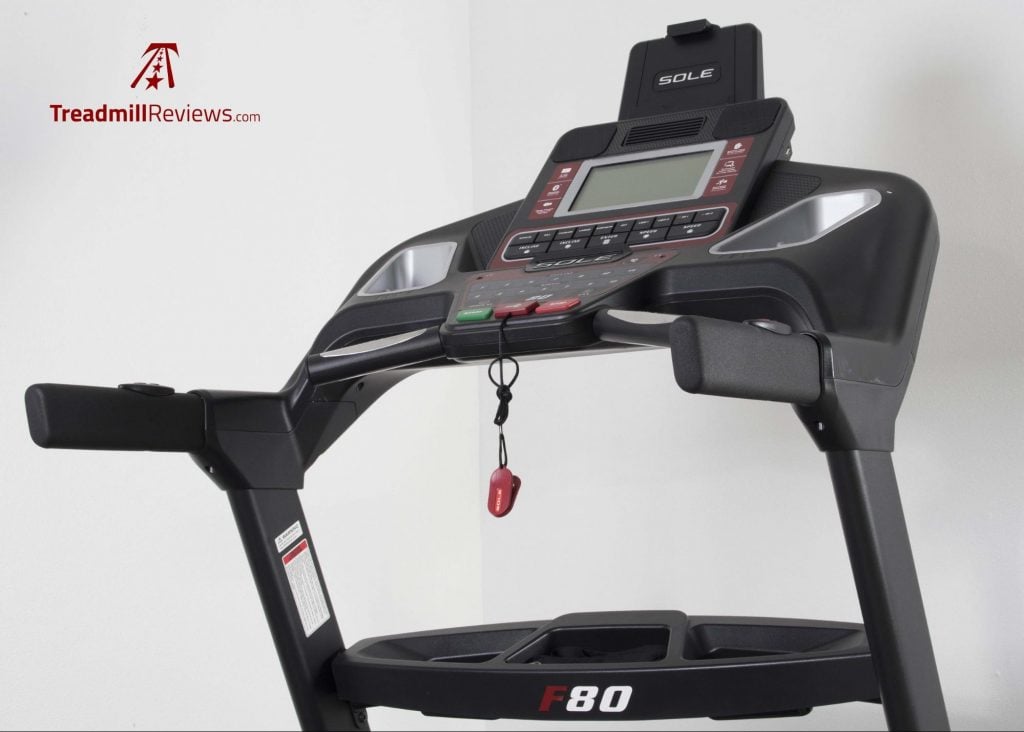 Brief Description: Sole created an app that pairs with their treadmills. It shows you exactly what you can see on the treadmill display. You may control the treadmill from your mobile device but we’ve found this to be slow and glitchy. The app does have an outdoor feature that tracks your activity if you were to go run outside.

Subscription Limitations: There is really not a lot of use for this service. We’re happy to see that it's free!

Sole Fitness Home Screen - Pair with device or use as an outdoor activity tracker. 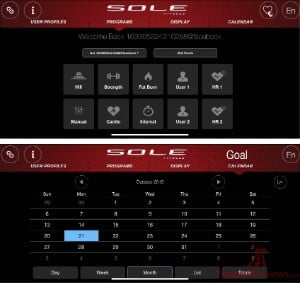 Sole Fitness App paired with your treadmill allows you to control your treadmill from your mobile device. We’ve found this app to be quite slow and glitchy. 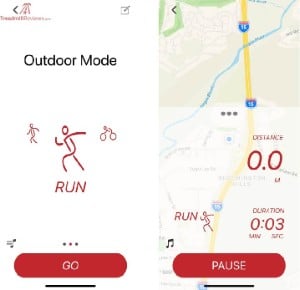 Sole Fitness App as an outdoor activity tracker allows you to choose from running, walking, and cycling. The app uses GPS to track your distance, speed, time, etc. Then stores workout data on the app.

Bottom Line Review of the F80 Treadmill by Sole

Overall, we really like the Sole F80 Treadmill. The build quality on this machine is solid, has a great weight capacity, and will perform very well for someone who is not super tech-savvy. We have it rated as a top pick for home treadmills in the $1500-$2000 category.

While the Sole F80 is available in some stores, we highly recommend purchasing directly through Sole. They typically have the best pricing, even on holidays like Black Friday or Memorial Day weekend. In addition, you get better support if you go directly through the manufacturer and there is no difference in terms of delivery options.